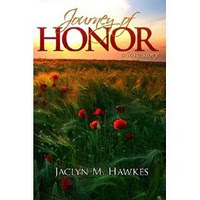 In Jacyln M Hawkes debut novel Journey of Honor the author takes you on a journey filled with adventure and danger. The story is about Giselle, a young LDS (Latter-day Saint) immigrant and Trace a young doctor, turned teamster leader, who discover they are traveling in the same wagon train west. Leaving from St Joseph Missouri in 1848, they find themselves in a situation which requires a marriage in name only for the sake of protection.

The marriage takes an interesting twist when attraction turns to longing and then to love. These two main characters are thrust into many perilous and at many times, life-threatening situations. The secret that Giselle carries with her, becomes a situation that endangers her life, regardless of the consequences she is determined to pull her weight no matter the cost, especially when she needs to help those that fall ill. Unbeknownst to Trace he leaves her to care for the sick which allows him to put both distance between their growing attraction and frees him to lead the wagon train and check on every one's progress.

This arrangement seems to be working well, until Giselle no longer is able to continue with her ministrations, forcing a change of events that forever alters Trace and Giselle's relationship. While Trace still holds honor to his promise to keep his marriage to Giselle in name only; it becomes more and more difficult as he fights his growing attraction and feelings for her. Especially when he holds her close during the cold winter nights. Just as Giselle also attempts to stop the burgeoning feelings of love that are taking root inside her as she allows Trace to comfort her as she faces the emotions of horrendous events that happened before they met.

These feelings of growing love become more focused for Trace and Giselle with the humorous interaction of an Indian Warrior who finds he wants Giselle for his own, and isn't willing to follow the rules of decorum.

Their journey forces them to analyze certain truths they hold dear about what they intrinsically believe and causes them to make decisions that will effect them forever as they reach The Salt Lake Valley. Trace and Giselle must determine if they will or will not get their marriage annulled as the need for protection nears its end.

There are many sweet side stories that brought tenderness and tears to my heart as I read Journey of Honor. I found myself growing attached the secondary characters as much as the primary ones. I thought Trace's adopted brother Mose was sweet and gentle and kind. He had such goodness in him, I couldn't help but love him. I also found Giselle's grandparents to be supporting and compassionate. I loved how her grandfather supported Giselle in her decisions when her parents would not, and were there to lean on during horrific events. I found the quiet strength of these characters to be a great addition to the story as faith and understanding of gospel truths played an important part in helping the main characters discover what truly was most important.

I felt sensitive issues relating to gospel truths were handled with care and were presented in such a way as to be informative and enlightening, in a story where the characters themselves discover what they mean to them, as they learn from one another and grow.

I really enjoyed reading Journey of Honor and found it to be a quick read. I felt at times that I wanted a bit more, wanted it to last just a bit longer in certain parts of the story. I thought that the love between Trace and Giselle was sweet and filled with just the right amount of longing and tension to keep the reader wondering what would happen next in their relationship. There were a number of funny scenes that had me laughing and tender moments that had me crying.

This is a book that has no swearing and would be considered a clean romance. I would recommend this book for ages 12 and over and if you enjoy a light hearted historical romance with out all the heavy history but filled with unexpected adventurous twists and turns, this is the book for you.

If you would like to get your own copy, click HERE. You can visit Jaclyn at http://www.jaclynmhawkes.com/ I know you will enjoy the story as much as I did.

Disclaimer: Although at times I do receive copies of books to review, my opinions are and will always remain my own.
Posted by Debbie Davis at 6:00 AM

Thanks for the review. I've read yours and 1 other. Overall, it sounds like she accomplished the task of creating a romance. Full of tension, yet hurdles to cross. Great!