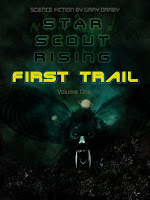 In Gary Darby's debut book, Star Scout Rising First Trail the reader is taken on a fast paced, intense journey through intergalactic space. This Sci-Fi mystery is filled with political intrigue and uncertainty as Del Baldura and his team of Junior StarScouts prepare to take their No Notice exam that will determine if the years of intense training allows them entry into the Senior StarScouts, who patrol space for new life and planets waiting to be discovered.

As team leader, Del Baldura is in the midst of an important mission that will help him and his four fellow team members advance to the next phase of their training in a field ops exercise. During the mission, one of their team members is kidnapped and the efforts of the rest of the team to rescue her lead them to unexpected adventures and dangers that kept me on the edge of my seat as I read furiously to find out what happened next. As the twists and turns and surprises kept coming, I found myself pulled deeply into the plot of the story, and felt my stomach churning with anxiety with many of the predicaments the team members and other key characters found themselves facing.

In addition to the excitement happening with Del's team, some with great control and power higher up in the Senior Star Scouts organization go against all they stand for and plot revenge against Del as they discover things about his past. They want to be sure he pays for incidents that occurred that were out of his control when he was younger. Power hungry and crazed with desire for complete and ultimate control , Pellar, a senior officer in the StarScouts with high ranking command has his fist wrapped tightly around the very lucrative Kolomite trade and rules the galaxy under concealment, with his corrupt addicting need to be the only one who commands how and where and what happens with any Kolomite found on any planet. He has infiltrated the StarScouts missions by utilizing their systems and encryption codes to secretively push his own agenda of power, wealth and revenge at the cost of all who might be in his way. His evil designs ooze into the pages of Star Scout Rising First Trail as he manipulates those around him.

Gary Darby has the ability to make worlds come alive and battles spark to life within the pages of Star Scout Rising First Trail. I found myself feeling the acid from the lake eat through the uniform and the under brush of a planets unfamiliar foliage brush against me. The adrenaline pumped through my body as I was chased and hunted down by unknown dangerous creatures. I could feel the peace of space as stars twinkled in the distance and the whine of the engines as space ships struggled to be free of capture. Making the experience of reading Star Scout Rising First Trail one I won't soon forget.

I am excited to know that Star Scout Rising First Trail is the first of a trilogy and look forward to knowing what happens next with key players in the story. There are some intense cliff hangers I want to know the answers to. I was left wanting the story to continue and wanting to be a part of the exciting daring missions and rescues that Del would be caught up in. I anticipate the chance to be drawn into the next books as part of the team while they explore new terrains and discover things that will surely shock and excite them.

Check out Gary's website at http://www.starscoutrising.blogspot.com/ to learn more fascinating things about Gary and his book. It was refreshing to read a book with so much action and excitment that had no swearing and was clean. I would recommend this book for all ages. To get your own copy click here, so you can be a part of the fast paced ride through space with Del and his team and be part of the mystery and intrigue they constantly face.

Disclaimer : While I sometimes receive a copy of the book I am reviewing, it does not in anyway influence my opinions. They are and will remain my own.
Posted by Debbie Davis at 6:00 AM

I like your book reviews, Debbie. How do you determine which books to review? Are you given copies in advance just to review on your blog, as your disclaimer implies?
It Just Got Interesting

Debbie, thanks so much for taking time to review my first novel; I thoroughly enjoyed and appreciated your insight into my attempt to write a fun book to read. Thanks again and my best to you.

Excellent review. Good information about the book without giving the surprises away. My review of this same book will be out later this month. :)