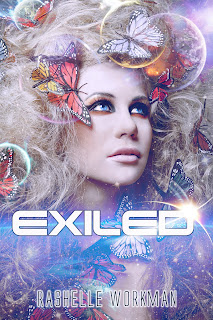 Exiled by RaShelle Workman is a YA Sci-Fi Romance about Venus, a sixteen year old princess who is about to go through a traditional right of passage where she becomes immortal. But before she can begin her journey things go terribly wrong and she falls ill and passes out. She wakes up to find herself accused of things she never did and exiled to Earth, a planet that will kill her in a weeks time.

Luckily, her guardian Zaren followed her, and was given the parameters that will allow her exile to be revoked and allow her to return to her home planet. She must help the earth boy Michael find his soul mate, and true love. Something Venus thinks, given humans volatile emotions, should be easy enough. Except things are not exactly as they seem and humans are unpredictable in what they choose to do. Now the clock is ticking and as Venus grows weaker, she is desperate to help Michael so she can go home to find out who set her up, but will she live long enough to make it happen?

I really loved the concept of the plot and how RaShelle weaves all the intricate sub plots into her story line. I fell hard for her characters and found my self rooting for them. Well the good guys anyway. But I thought she developed a wonderfully evil antagonist as well in Vinny.

I was drawn page after pager deeper into the story and was left in the end wondering what would happen next. I thought Exiled was a swift page turner and look forward to the next book in the series.

So some are rooting Team Zaren or Team Michael. I am rooting for them both, and interested to see how it all falls out as the story goes forward. I don't want to choose sides just yet. But if you want to know what I am talking about then you should hurry and get your copy of Exiled by RaShelle Workman so you can see exactly what I am talking about.

To get your copy of Exiled, click here, so you too can be caught up in the world of Venus and all the intrigue that surrounds her as she accomplishes her mission and discovers things about being human that are both compelling and undeniably fascinating, all while trying to understand the strange new emotions whirling inside her for the first time ever.

You can visit RaShelle's website here, and learn more about Exiled and her other books.

Disclaimer: Although at times I receive copies of books to review, my opinion will always remain my own.

yeehaa for our dear Shells :)

Very nice review Debbie! I haven't read EXILED yet. *cries* But I plan to remedy that soon!