Book Review: No Holly For Christmas By Julie N Ford 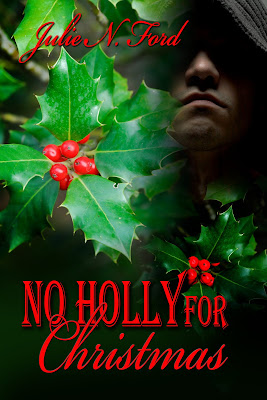 No Holly For Christmas By Julie N Ford was a fast paced suspense romance that captured me on the first page. Attorney Brian McAlister steps into a high profile case when his father becomes seriously ill. As he is nursing a broken heart from a long time love he tries to move on, with little hope of it ever mending. But with the demands of the case he's been assigned there isn't much time to think about the past, especially when Holly Winter a social worker who helped a suspect on the case before his release from the hospital steps on the scene.


In no time, Brian persuades beautiful Holly to help him in his case to lure an escaped con back to the hospital where Holly counseled him through his wound. Before he knows it he is neck deep in protecting Holly and her 2 children and working against the clock to unravel the many disjointed pieces of the case against a high powered wealthy man bent on using any means available to pressure Brian into dropping the case.

Never did Brian expect in the process that he would lose his heart, nor that he would find that what he once believed as black and white truth maybe had some gray tinges to them.

Holly meanwhile is trying to piece her life back together after the unexpected death of her husband less than a year ago which forced the drastic changes to the type of wealthy, organized and orderly life she was accustomed to living. In the process she too finds herself changing her ideas of what is really important in life and with Brian stepping into her life she discovers some changes and bending can be rather nice. Even if it means losing your heart.

I really loved reading this book. I found the characters grew so much and I really liked them and hurt with them. From main to side characters, Julie creates a full and rich world that grabs and holds you tight.

I felt a connection with Holly and could understand that life throws you a curve ball or a hundred and it demands you to look at things in a different way. I liked watching her discover that she could survive and be strong and be more and not have to yield to the dictates of her high class upbringing all the time. She was strong, and confident, but at the same time vulnerable and in some times unsure. It was nice to see the contrasts in her.

I also enjoyed Brian and his take on things. That when all the control in his life slips through his fingers, he learns that maybe that is OK, and that maybe the things he never thought he wanted were exactly what he needed all along. Forcing him to look inside himself at what really matters.

I could not put this book down. I was drawn in by the plot twists and the desire to know who would win, the good guys or the bad guys. I felt the clock ticking down as the climax built until I was on pins and needles wondering how it would all end up. I loved the sub plots and all the build up of the relationship between Holly and Brian.

No Holly For Christmas by Julie N Ford, is a clean read. There is lots of intense sensuality and hinting but it doesn't go beyond that. I was impressed with how well Julie was able to build the romantic steamy tension between Brian and Holly with out going any farther, and I commend Julie on her writing skill. I look forward to reading more from Julie N Ford.

To get your own copy of No Holly For Christmas just in time for the Christmas holiday click here. You can learn more about Julie N Ford by checking out her website here.


disclaimer: While at times I do receive copies of the books I review, my opinion is and will always remain my own.
Posted by Debbie Davis at 4:00 AM

Debbie,
Thank you so much for the wonderful review. I'm so glad that you enjoyed the story. I hope you have a great Thanksgiving and a Merry Christmas!
Julie N Ford