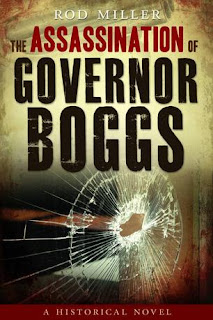 The Assassination of Governor Boggs By Rod Miller is fictional exploration written from the view point of Detective Calvin Pogue who was hired by William Boggs the son of Governor Boggs to find out who shot his father in the head so many years ago, to gain a sense of closure. A name is given as who the family suspects was the gunman. When asked who, one legendary Mormon was named as the shooter, Porter Rockwell.


The cold case takes Pogue across the country, as he interviews various individuals who knew of or had contact with the either the situation or Rockwell himself. Taken from the neutral eyes of Pogue, each character interviewed displays his personal feelings for the situation and their opinion about Rockwell, or Boggs. The venom or unease from either side of the story is clearly evident. And the reader learns how biased some individuals still remained regarding the events of years gone by.

As the case unfolds, Pogue's travels take him to where it all began and then across country to Utah, and eventually to old Porter himself. All ending with an unexpected ending that will leave your heart racing.

I enjoyed learning the different points of view and gaining a better understanding of the events surrounding the shooting of Governor Boggs. The letters, documents, interviews, and journal entries help build the story.

I do wish there was more showing in the story instead of telling about past events through dialogue with different characters. But I did come away from the story with a better sense of what happened during that time frame as told through the experiences of prominent individuals during that period of time.

If you are a lover of early LDS Church History, at a time of turmoil and unrest when great persecution towards the saints was rampant, and if you enjoy those off the beaten path kinds of individuals like Porter Rockwell, then The Assassination of Governor Boggs by Rod Miller is the book for you.

To get your copy click here, then you can step into one of the biggest unsolved mysteries of the time period and see if you can determine who really shot Governor Boggs.

Disclaimer: At times I do receive copies of books to review, but my opinions are and will always remain my own.

Debbie: Thanks for the review of THE ASSASSINATION OF GOVERNOR BOGGS. I appreciate your time and attention. :Rod Miller

Sounds like a really interesting story. Thanks for the review.