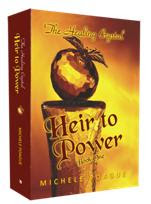 Heir to Power By Michele Poague is the first book in The Healing Crystal Triolgy. It is a YA science fiction novel about lost technology, the morality of power and the creation of religious and political philosophy.

Overview:
The colony of Survin has been hidden for centuries, protecting an ancient religious artifact called the Healing Crystal from men who would steal or destroy it. Kairma, heir to the Crystal, is destined to mate with the handsome Naturi and become the leader of the reclusive colony, but she is too young to realize the peril soon to arrive.

At sixteen, Kairma is too young to realize many things .... Kairma would rather go spelunking with her brother and his best friend than study ancient medicine and religious laws, but the discovery of a tomb containing ancient artifacts leads Kairma to question her religion and the true nature of the Crystal. To further complicate Kairma's ascent, a childhood illness has left her resembling a nearby race of men both hated and feared by the people of Survin. Because of this, Kairma's younger sister Kinter, who is in love with Naturi, believes she is the rightful heir.

Disease and infertility have decimated Survin, but bigotry and religious laws forbid the introduction of new members so things heat up when a traveling archeologist stumbles upon the reclusive colony and introduces a powerful new weapon. Forced into a larger world, the Survinees discover they hold an object of unimaginable power, a power other men covet, a power that might save or forever damn the human race.

My take:
I liked that in Heir to Power, Kairma starts off feeling maybe she really isn't able to live up to everything everyone always expects of her, that becoming the hier to power is more of a burden than anything else. She resents it in many ways. But I loved the character Arc as she grows throughout the story and discovers inside of her strenghts and abilities she never new she possessed in addition to finding some mysterious things that cause her to question what is going when the White Ones begin to show up around her. She also begins to embrace her differences rather than hide from them.

Also the growth Collin , her and her brother's best friend goes through is very fun to be a part of as he realizes the importance of bringing new information into the colony and wants to explore beyond it even though it is forbidden. With the arrival of the stranger, Trep, Collin becomes fascinated with what is beyond their little valley and is determined to leave, and bring back innovations that will help their community to grow and protect themselves more efficiently. He is also the most willing to accept Trep for who he is and sees that it is a good thing that he came, and tries to convice those in the colony not to be threatened by him Trep's presense. He also realizes how much he is willing to fight for what is important to him, and on top of that list is Kairma. He knows that Naturi is expected to be her mate, but he will not let it be easy for Naturi to take her.

Naturi, has always known he would be the one to stand by Kairma when it came time to take a mate. He has trained all his life to take his place in the healing family and lead the community. It is something he has looked forward to all his life, but when Collin leaves the colony with the stranger, he along with Kairma's brother go with him. While gone he discovers there is more to life than what he expected and he begins to see things differently.

I found the changes and discoveries the characters made fascinating, and was drawn in by each new thing they found about themselves and the world around them. I looked forward to what would happen between Naturi and Collin. I loved how Kairma found that she was ok with who she was and that she could be confident too. I really liked how all the little things play in together to create intrigue and mystery, that make me excited about the next book in the trilogy.

Heir to Power was a fast paced page turner. It drew me into a world that was familiar in many ways, but had so many differences that I wanted to see how they overcame them. I liked the interaction between the many different characters. I found the prejudice over simple things the members of the colony display toward things that are different or unfamiliar. There is suspicion and intrigue brought out. It was nice to see how each character handled the different challenges that came and how growth resulted. I am really excited to see what is in store next in the next book, to see who wins Kairma, Collin or Naturi.

Personally, I hope Collin wins Kairma's hand. He is one of my favorite characters. His independent thinking and strength really called to me. I am keeping my fingers crossed and look forward to the next book to see what happens.

Heir to Power is appropriate for all ages. I didn't want the story to end, and look forward to finding out what happens next. If you want to see what all the excitment is about then you need to get your Copy of Heir to Power right away by clicking here. To learn more about Michele Poague and the things she is working on next, click here to go to her website. You will be glad that you didn't miss out on all the fun.

Disclaimer: While at times I receive copies of books to review, my opinions will always be my own.
Posted by Debbie Davis at 6:00 AM

I liked the ebook, also and I am giving away Fall of Eden, book 2 of this series on my blog (along with an afghan), so drop by if you can! Sandra Jeanz will be doing a guest review of it.